There are many small steps you can take to improve your computer’s performance. If you are having issues with your system, changing the display settings is a fast and easy way to give your PC’s speed a little boost.

Right click on the desktop and select “Properties.” From the “Settings” tab, change your computer’s color quality from 32 bit to 16 bit. This will alleviate some of the work done by your video card and slightly increase overall speed.

For another boost, right click on the desktop’s “My Computer” icon and select “Properties.” Open the “Advanced” tab, and select the “Settings” button in the performance section of the window. The next screen allows you to disable visual styles and effects that you might not necessarily need. 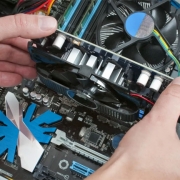 Everyday people like you are injured or lose important systems and data when trying to repair their computers. You need to take certain precautions to prevent disaster. To get started, you’ll need to know how to protect your computer systems and data. This step can’t be overlooked! Wash your hands to prevent spreading grease or dirt to your computer components. When handling components be sure to only touch the edges, especially the chips on the motherboards themselves.

Understand that even your skin oils can damage the inside of a computer. Static electricity can also be your enemy, especially if you are not aware of it. Simply put, it can damage components beyond repair. The equivalent of about 6,000 volts of electricity can be transmitted easily just by walking on carpet, and that is enough static electricity to completely fry your computer and all its components. Even smaller amounts of electricity can damage components. So, a surge protector must be used when you plug your system in. Computers and equipment are sensitive to changes in voltage, so a surge protector will protect them against large spikes in voltage but not an outage. A battery backup system is the best way to protect against a power outage, as it provides the system with constant voltage.

To keep you safe when working on computers follow these guidelines:

These personal effects are often made of conductive metals which, aside from possibly damaging components by striking them, could also short circuit pieces of your computer or transmit damaging amounts of static electricity.

Working on computers that are plugged in is an easy recipe for damaging the hardware. If the machine powers up in the middle of you plugging in a component, chances are the component and perhaps the motherboard itself may sustain critical damage. Modern processors will overheat in as little as 7 seconds without their heat sink attached. There are many more ways that carelessness on this subject could damage hardware.

Computers that have been plugged in have a residual charge residing in their electrical components. If the computer is not properly grounded for any number of reasons the residual charge has a possibility of damaging the machine or interfering with its ability to correctly function. Similar to the previous section, the residual charge is usually enough to actually power up the machine for a moment, resulting in massive damage to components if they are in the middle of an install or un-installation procedure.

Power supplies and older CRT style monitors both contain capacitors that hold enough charge to stop the human heart. They can and have killed people in the past. Even if you know what you are doing and take the proper precautions, neither component is worth the danger at this point when the prices of new LCD monitors and replacement power supplies are so low.

Use an anti-static wrist strap

We spoke earlier about how even the slightest static discharge can damage components. Not all damage is immediately apparent either, you may not have damaged a component in such a way to make it fail but instead of its usual 10 year operating life it will now last a total of 3 years before it fails due to the stress of the shock it received. An anti-static wrist strap is an easy and safe way to make sure you are grounded and not in danger of transferring energy into your PC components. Sure, you could maintain a ground by hanging onto the case the entire time, but it is much easier and safer to have both hands available for work and a ground that does not require you to think about maintaining it. This is especially true for the computer repair beginner, where an accident could easily hinder your plans to proceed further in this field. Also remember, how you treat your own PC components is your business, but when you are working on someone else’s hardware it is important to maintain good standards in safety and professionalism. The anti-static wrist strap helps serve that goal.